[ZONA NORTE is a fascinating and disquieting book. Many books at once, better. There is a learned discussion about the history, characteristics, pros and cons of autoethnography; there is a sociological analysis of peculiar social phenomena and environments; there is a narration of a portion of Michael Hemmingson's life, as it drifts or journeys (across borders of various types) through different cities and relationships; there is, last not least, a philosophical interrogation on desire (and need).- All of this merits the greatest respect. I couldn't say if it was hell or paradise he travelled through, but undoubtedly he makes them excruciatingly real- while all of the time trying to maintain a steady eye on what he's doing - and on the meetings and choices he makes. GC] 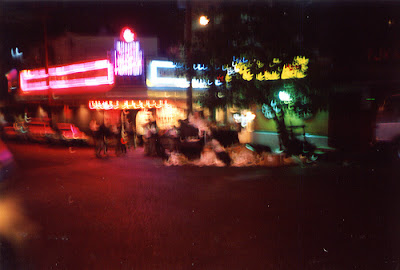 
The red light district of Tijuana, Zona Norte, or the northern district, is about a ten-to-fifteen minute walk from the border, la línea, or a $3-to-5 taxi cab ride. Another signifier of the area is ―La Coahuila, named for the narrow, alley-like street most of the clubs and streetwalkers are located.
When approaching Tijuana by car or city trolley, the city arches can be viewed in the distance—tall, metallic, dull in the sunlight, located at the town square of Prima y Revoluciόn. This is where Zona Norte begins. The square is crowded with mariachi musicians waiting to be hired. There are scattered women going in and outside taxi dance bars. Street barkers  try to get customers into their cantinas, restaurants, and shops. Children sell gum and candy for a quarter. Old women sell jell-o and jewelry out of cardboard boxes. Police officers and federales patrol the area on foot and in trucks, seeking out crime and bribes. Shoe shiners will spruce up loafers for $1. Dozens of street vendors sell tacos, ice cream, churros, and corn-on-the-cob. Cars drive around in circles, voices blasting out of a horn that tamales or other food items are for sale, hot and ready out of the trunk. Hundreds of taxi cabs wander every street, seeking a fare to take back to la línea…


La Línea: A Note
They call it ―the line: la línea. It is a Rubicon between two worlds. ―More than a just a political boundary la línea locates both Mexico and the United States on opposite sides of the coin in a global system of trade and production‖ (Light, 1999). Running 2,000 miles, the border stretches across the desert and mountains of the Southwest, representing much to many: a buffer between two friendly but distinctly different nations; a zone of protection between the First and Third Worlds; a final, tortuous hurdle between making $6 a day and making $6 an hour (de la Garza, Magus & Castro, 2003).
Urban philosopher Mike Davis (1995:3) writes in Granta:
The populist flavor of Tijuana, of course, is scarcely savored by the day tourist from the Midwest. The radical shortage of water, and thus of formal landscaping, gives the city an arid, almost Saharan visage that reads immediately as Danger: Third World. Moreover, Tijuana remains stigmatized by its past life as a zona roja for the U.S. Pacific fleet. Yankees still fear contamination by their own moral sewage…. La línea, by contrast, has unexpected energies. A steel knife slicing through daily life on both sides of the border, it is also, in [Gustavo] Leclerc's words, ―a superb stage for subversive practices of all kinds. While the Migra is playing hide-and-seek with the mojados in the hills, kids from an adjacent colonia organize a soccer game on the U.S. side. Street vendors sell tamales. Artists build illegal installations. And Tijuana simply yawns in the face of its paranoid neighbor across the wall.
Brizzolara (2006:192), in his column for the San Diego Reader, describes Avenida Revolución, the main drag, itself a kind of dragon entity in some eternal urban New Year's dance of the Worm Ouroboros. Whistles, sirens, waiters shaking the heads of your missing children like maracas as they pour tequila, Kahlua, mescal with the worm that makes you dream of flying 100 miles an hour exactly one inch off of the ground. Those dreams come later, nightmares are likely first. Faces come at you out of the night and indeed you are likely to hear the Lizard King singing that exact Peso Opera piece from sub-sonic weapons-grade sound systems. But this is not Berlin, wall or no wall, it is Tijuana. Through your open window, set high, as if in the cinder block of a cell wall, curdled blue/gray smoke writhes inside. Shot through the charred carnitas fumes like lightning is the staccato stuttering detonation of distant disco balls.


La Patria
Before the violence between the drug cartels and the police that frightened many tourists off, every Friday and Saturday night, thousands of people, many in the age 18-21 crowd (when I went there at age 16 in 1983, I could buy alcohol and go into strip clubs—see Chapter Three) traveled southbound from San Diego across the San Ysidro/Puerta México Port of Entry. They passed by Plaza Viva Tijuana, a retail commercial center adjacent to the border station, and, by foot or taxi, headed straight for the nightclubs and bars along Avenida Revolución, the biggest ―paseo‖ in town. That is ―where la patria begins,‖ states a municipal motto posted at the Tijuana Tourist Terminal between Sixth and Seventh Streets. The party continued in bars and cantinas on parallel streets Constitución, Agua Caliente, and Niños Heroes, and did not end until sunrise. ―No cover before 10:00 pm, ―$20.00 all-U-can-drink and ―2-fer-1 specials seduced the hordes of young pedestrians into disco bars such as Club A, Baby Rock, El Jardin, Zka, Bacarat, Tequila Sunrise, Safari's, and of course the Hard Rock Café. These contemporary nightclubs invested in glitzy decors, convoluted lighting, and potent sound systems designed to blast out norteño, Tejano, Conjunto, rock and roll and techno pop at decibel levels high enough to drown out conversation even among the sidewalk passersby. Inside, as high-pitch whistles quaver and onlookers hoot and holler, it was common to see barhops moving through the crowd with Tequila bottles of all varieties (Cuevero, Don Julio), inviting patrons to hold their heads back while servers pour straight shots directly down their throats. Club employees were generally Tijuana citizens but not natives, many first and second generation immigrants from all parts of the republic: Jalisco, Sinaloa, Veracruz, Guanajuato, Puebla, Oaxaca, Chiapas and every other state of the nation. This is the same for those doing sex work on the east side of Avenida Constitucion, just north of First Street. No one is ―from Tijuana; they have all come here to work and make money.


Different Places to Find Prostitutes
―Tijuana‘s prostitutes have drawn tourists since the turn of the century, spreading in recent years from the red-light district known as ‗La Coahuila‘ […] to other pockets of the city of 1.2 million‖ (Associated Press, 2005).
●Taxi dance cantinas. Near the arches, before reaching La Coahuila, are several taxi dance bars, or cantinas, such as the Diamond Bar and the Rio Verde Club. These are small, crowded, smoky, dark establishments frequented by mostly local women who come to make a few dollars dancing, drinking, and perhaps to have sex (at the right price). Few American, European, Asian, and Middle Eastern tourists are found here; they are generally for local men with limited funds. It is seldom that anyone speaks, or knows, English in a taxi dance bar. A gringo or other foreign tourist is a rarity, but the money is always welcome; thus, bartenders, waiters, and women do not turn away any man who happens to wander in.
●Massage parlors. These establishments can be found all over Tijuana, not just Zona Norte. Their signs are advertised above dental offices and pharmacies. While these are indeed places to obtain sexual gratification, a bona fide massage can be enjoyed as well.
●Stripper bars. Many of these can be found on the main tourist drag, Avenida Revoluciόn—numerous barkers will stand outside, aggressively yelling at passing men to come in and ―see the girl, see the pussy, see the hot young things. Sometimes these places will be empty, despite all that is promised. The Unicorn Club and Bambi's are commonly known—they are establishments I chose to avoid. The drinks are over-priced and the women (if they are women, as transsexuals are known to frequent clubs with low-lighting) are professional hustlers. In Zona Norte, there are a handful of stripper bars—Hong King Club, Adelita's, and Chicago Club—that I will later discuss in detail. ●The Street. The majority of prostitutes in Zona Norte stand on the street, lined up against the walls, trees, trash cans, cars: waiting. Las parditas. Tijuana/San Diego Sexualities 29
●Gentleman's clubs. In these upscale venues, the drinks and food are overpriced and the woman dressed as if out on a night to the Opera. The women usually speak good English and claim to be college students or graduates. Sometimes American, European, and Asian women will work in these places. The women will sit and talk to a client for hours, as long as the client pays for drinks, food, and the time. Gratuity expected, whether sex occurs or not.
●Escort services. These services have their own websites. They feature pages for each woman, with their photos and codes for what they do—e.g., BBBJ is ―bare back blow job (no condom). Appointments are set by phone or email. The women will meet a client at a hotel, if the client is staying in a decent place, or will meet a client at the border, either with a driver or in their own, where the woman will take her client either to an upscale hotel or her apartment (usually for repeat, trusted clients).
●Craigslist. Escorts advertise here, either via an agency or on their own. Women who need to make some emergency cash, rather than regular professionals, will post ads. Some ads are scams—the woman will post a picture of someone else, perhaps a woman who is younger, thinner, or more model-like; there have been reported situations to set a person up and rob them. While finding a prostitute via Craigslist can be an adventure for those seeking a seedy thrill, it is not, as a general rule, recommended—especially not in Tijuana, where the availability for prostitutes is greater, and safer, by just seeking the experience out on foot. (I devote the next chapter to women who advertise on Craigslist.)

http://papers.ssrn.com/sol3/cf_dev/AbsByAuth.cfm?per_id=930477 (MH's scholarly papers on the Social Science Research Network) ['Zona Norte' was once hosted here whole; I downloaded it then] 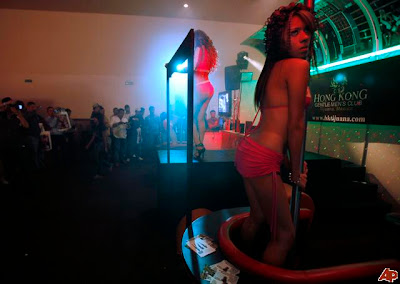