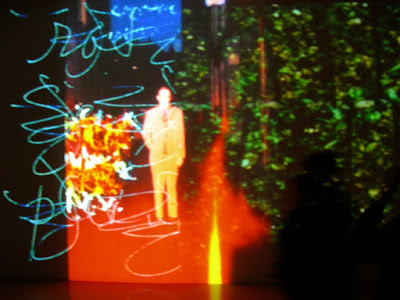 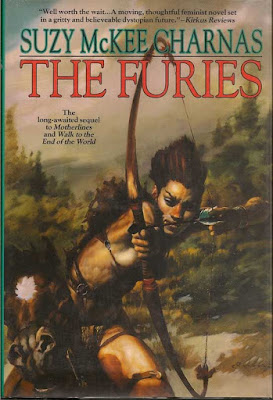 Sheel rode down into the ruins of 'Troi with two others whom she trusted in a fight; three Riding Women of the Grasslands, strangers in the Holdfast. From afar 'Troi looked like a blighted pasture from which the soil had all been blown by some monstrous wind, so that only blackened shards of masonry grew there now. Up close, it was a terrible place. Sheel was afraid the broken walls might collapse on her. The footing was a rough, hummocky quilt of ash, bone, and rubble that made her worry about laming her horse. She was deeply relieved to leave the place behind.
They rode on uneasily, listening to the creak of saddle leather and the thud of the horses' hooves on alien ground. Before them lay a long, smooth slope of grass, islanded with young trees and dappled with the shadows of passing clouds. Sheel, a rider of the plains, had never been nervous of being in the open before, but this was different. She thought, "This place is empty in a way no place is empty at home. This is a hungry emptiness. It has swallowed Alldera and her little army of Free Fems, and now it swallows us."
Perhaps she and her companions would ride and ride but never find anyone living at all. One day they would simply ride into the sea — which she imagined as a rushing river with only one bank — and none of them would ever be heard of again. Haunted by these thoughts, she reproached herself: she should have come here alone and stopped the Free Fems' mad adventure herself, somehow, without endangering anyone else.
Down-river on the north side, they followed a broad trail paved with worn, flat stones. This would be a "road", she supposed, a silly thing; as if the Holdfast people had been so afraid of getting lost in their little patch of country that they had to mark its trails permanently so they could always find them again.
The riders were making camp where the land dipped and good watch could be kept from a ridge above, when Ayana Maclaster came galloping back from scouting up ahead. She looked green around the mouth.
"Come look," she croaked, and wheeled to return the way she'd come.
With a heart full of foreboding, Sheel rode after her.

Is cruelty innate in human beings? (no self-evident answer, I think)


p.e. "I cut off their hands, I burned them with fire, a pile of the living men and of heads over against the city gate I set up, men I impaled on stakes, the city I destroyed and devastated, I turned it into mounds and ruin heaps, the young men and the maidens in the fire I burned" [Ashurnasirpal II (r. 883–859 BC), King of Assyria]