Zizek at #OccupyWallStreet [via Jodi Dean] 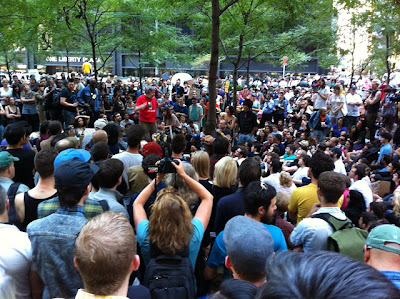 Here's a transcript of Zizek's remarks at Occupy Wall Street (thanks, Alain, for the heads up). I don't share all the views that he voices here. I wonder whether he shaped his language to fit the format of a general audience or if this is pretty much what he thinks. Given his writing, it could go either way. Rather than try to parse it, I'll just provide my own responses.

We are not Communists if Communism means a system which collapsed in 1990. Remember that today those Communists are the most efficient, ruthless Capitalists.

In China today, we have Capitalism which is even more dynamic than your American Capitalism, but doesn’t need democracy. Which means when you criticize Capitalism, don’t allow yourself to be blackmailed that you are against democracy. The marriage between democracy and Capitalism is over. The change is possible.

Of course, Zizek himself has said that no one should talk about communism who is afraid to talk about--criticize--democracy. I am assuming that he is invoking democracy in an ideal sense (rather like Ranciere when Ranciere describes all politics as democratic). For many at OWS, it is likely the case that "democracy" is the term they use for their aspirations. They likely see the political system as anti-democratic in the sense that they feel excluded from it, in the sense that it doesn't represent or reflect their interests. That makes sense--it's essentially the only language we have in the US, given the deeply entrenched anti-communism and the convergence of democratic ideals with contemporary participatory media. In my view, it's important to shift away from a language of democracy. It makes it seem like the problem is lack of participation and not capitalist system. To speak in terms of democracy de-radicalizes, and de-politicizes the situation--especially because of the way it can be picked up, transmitted, appropriated to reassure everyone that this is business as usual. In our setting, the language of democracy prevents antagonism from appearing--no one is against democracy. Democracy is only democracy for the ruling class--not for the rest of us. Zizek is speaking here as if there had been a time when bourgeois democracy was something other than that. I think it makes more sense to speak in terms of the organized power of the people and abolition of capitalism.

What do we perceive today as possible? Just follow the media. On the one hand, in technology and sexuality, everything seems to be possible. You can travel to the moon, you can become immortal by biogenetics, you can have sex with animals or whatever, but look at the field of society and economy. There, almost everything is considered impossible. You want to raise taxes by little bit for the rich. They tell you it’s impossible. We lose competitivity. You want more money for health care, they tell you, "Impossible, this means totalitarian state."  There’s something wrong in the world, where you are promised to be immortal but cannot spend a little bit more for healthcare. Maybe we need to set our priorities straight here.

These lines are great--classic Zizek. They zoom in perfectly on the contradictory conditions of our contemporary setting.

I agree with better standard of living. But I disagree with the "only sense in which we are Communists." The sense in which we are communists is in a commitment to universal egalitarianism, to the abolition of capitalism (a system inextricable from inequality and exploitation), and to the common production, distribution, and creation of our common conditions. I'm not fighting for genomes. I'm fighting for an approach to science and health that begins with a concern for the health and well-being of everyone, one without profit or ownership. I'm not fighting for the commons privatized by intellectual property--I'm fighting against the very form of property.
I don't think that communism failed absolutely. Nobody got to communism. States and movements tried for a while and failed. But this failure was not absolute.

They are telling you we are not American here. But the conservatives fundamentalists who claim they really are American have to be reminded of something: What is Christianity? It’s the holy spirit. What is the holy spirit? It’s an egalitarian community of believers who are linked by love for each other, and who only have their own freedom and responsibility to do it. In this sense, the holy spirit is here now.

I don't think religion and politics mix well. It's bad on the right. We don't need a left that does it, too.

And down there on Wall Street, there are pagans who are worshipping blasphemous idols. So all we need is patience. The only thing I’m afraid of is that we will someday just go home and then we will meet once a year, drinking beer, and nostaligically remembering “What a nice time we had here.” Promise yourselves that this will not be the case. We know that people often desire something but do not really want it. Don’t be afraid to really want what you desire. Thank you very much.

We need more than patience: we need courage and will.
I love the line: "Don't be afraid to really want what you desire."
via www.imposemagazine.com
Pubblicato da giacomo conserva a 03:01